Stay informed of SNMA events by subscribing to our enewsletter.

Join us for a conversation with writer Roxane Gay

Join us on Wednesday, January 27, 2021 at 6:30 pm for a ZOOM conversation with writer Roxane Gay.  Presented in conversation with SNMA Executive Director Hunter O’Hanian, Roxane will discuss her latest book “The Selected Works of Audre Lorde”.

About “The Selected Works of Audre Lorde”
Self-described “black, lesbian, mother, warrior, poet” Audre Lorde is an unforgettable voice in twentieth-century literature, and one of the first to center the experiences of black, queer women. This essential reader showcases her indelible contributions to intersectional feminism, queer theory, and critical race studies in twelve landmark essays and more than sixty poems—selected and introduced by one of our most powerful contemporary voices on race and gender, Roxane Gay.

About Roxane Gay
Roxane Gay’s (pronouns she/her) writing appears in Best American Mystery Stories 2014, Best American Short Stories 2012, Best Sex Writing 2012, Harper’s Bazaar, A Public Space, McSweeney’s, Tin House, Oxford American, American Short Fiction, Virginia Quarterly Review, and many others. She is a contributing opinion writer for The New York Times. She is the author of the books Ayiti, An Untamed State, the New York Times bestselling Bad Feminist, the nationally bestselling Difficult Women and New York Times bestselling Hunger: A Memoir of My Body. She is also the author of World of Wakanda for Marvel and the editor of Best American Short Stories 2018. She is currently at work on film and television projects, a book of writing advice, an essay collection about television and culture, and a YA novel entitled The Year I Learned Everything.

Learn more and order the book at wwnorton.com or borrow the book from Stonewall Library. 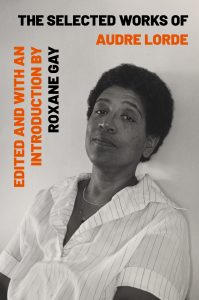 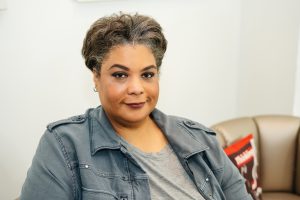 A conversation with writer and art historian Jackson Davidow

Join us on Tuesday, February 2, 2021 at 6:30 pm for a ZOOM conversation with writer and art historian Jackson Davidow.  Presented in conversation with SNMA Executive Director Hunter O’Hanian, Jackson will discuss the concept of queer architecture.

About Queer Architecture
What is queer architecture? How has the field of architecture shaped and been shaped by queer and trans experiences and understandings of space? Through a selection of historical and contemporary case studies, we will consider how architects and other cultural practitioners have developed spatial strategies to create worlds and build communities. We will also consider how LGBTQ people have used, interrogated the limits of, and laid claim to architectures that have been hostile to sexual and gender difference.

About Jackson Davidow
Jackson Davidow (pronouns he/him) is a writer and art historian. He studies modern and contemporary art and visual culture from a transnational perspective, with a focus on queer, feminist, and decolonial aesthetic practices of activism and therapy. His work has appeared in American Art, Art in America, ASAP/J, Boston Review, Critical Inquiry Review, Thresholds, Urban Omnibus, and X-TRA Contemporary Art Quarterly, as well as in the book Otherwise: Imagining Queer Feminist Art Histories. 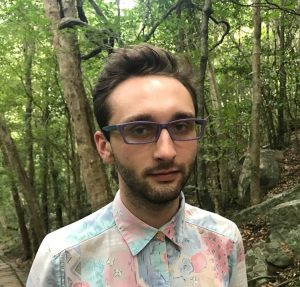 A Conversation with Scholar of Communication, Rhetoric, and History Jeffrey Bruce Nagel

About Jeffrey Bruce Nagel
Jeff Nagel (pronouns he/him) is a doctoral candidate in rhetoric in the Department of Communication Arts and Sciences at the Pennsylvania State University. His work focuses primarily on gay and lesbian activism in the 1950s and 1960s, prior to the Stonewall Riots, and includes studies of the Mattachine Society and the Daughters of Bilitis. He also examines the public speech and writings of individuals in this period, including Franklin Kameny, Jack Nichols, and Barbara Gittings. His dissertation, entitled “Queering Absence: The Rhetoric of the Homophile Movement,” argues that these groups utilized unique rhetorical elements, relying on strategies like silence, passing, and the wearing of masks. His work has been published in several academic journals and other media outlets, including QED: A Journal is GLBTQ Worldmaking, Women’s Studies in Communication, and the Southern Journal of Communication. 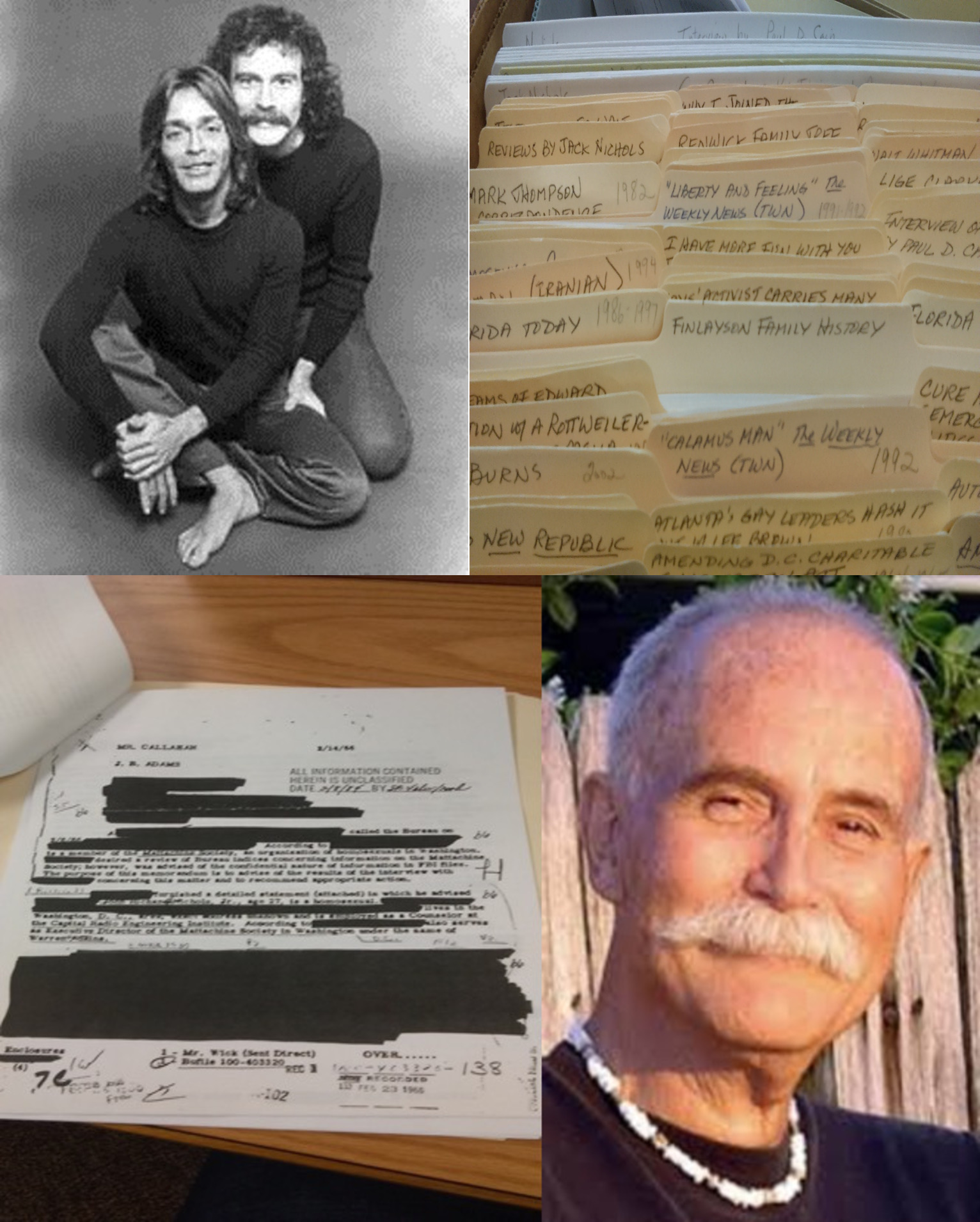 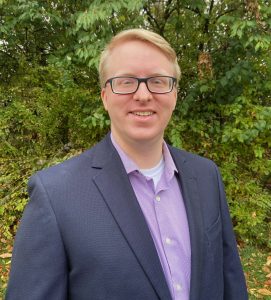 A conversation with filmmakers Lloyd Coleman, and Marc Saltarelli – STUDIO ONE FOREVER

Join us on Tuesday, February 16, 2021 at 6:30 pm for a ZOOM conversation with filmmakers of the documentary Studio One Forever. Co-Producer Lloyd Coleman and Director Marc Saltarelli will discuss the film and the infamous disco, in conversation with SNMA Executive Director Hunter O’Hanian.

STUDIO ONE was more than just a disco, it was mecca for gay men looking for identity in a world that saw them as outcasts.

In 1974, the disco craze was just beginning to sweep the nation when Scott Forbes, a gay optometrist, had a vision to open the first gay disco in West Hollywood.   He wanted to give young gay men a sense of the Hollywood glitz and glamour they craved.

Temperatures rising, flashing strobe lights.  Disco reverberating through our bare chests. And swarms of a thousand irresistible men with flirtatious smiles that were welcomed and returned.  Everybody wanted to be at Studio One, but women and people of color were often denied entry.   Protesters picketed the club entrance and a boycott happened.  But the lines around the block only grew longer.

Before Studio One, gay bars were shuttered with secret entrances.  Gay men faced hate and homophobia, police brutality and violence, even death.  Studio One changed all of that. Once inside, young gay men would climb the Studio’s dark staircase, cast away their existential fears, and find Heaven. Learn more. 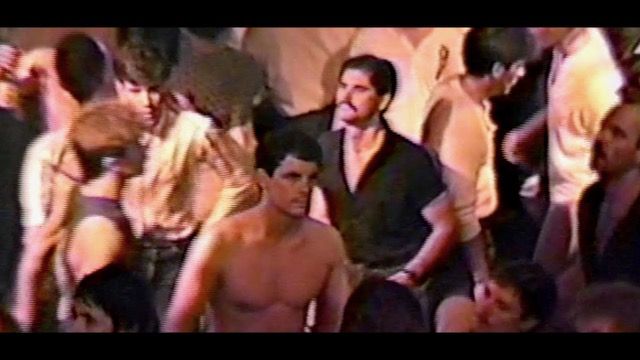 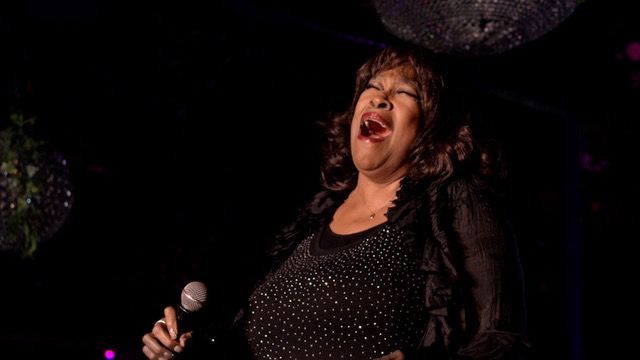 Join us on Wednesday, March 3 2021 at 6:30 pm for a ZOOM conversation with art historian Nikki Greene. Presented in conversation with SNMA Executive Director Hunter O’Hanian, Nikki Greene will discuss the exhibition Boston’s Apollo: Thomas McKeller and John Singer Sargent, taking a closer look at the man who inspired so many of Sargent’s works.

Nikki A. Greene, Ph.D. received her BA with honors in Art History from Wesleyan University, and her Masters and Ph.D. in Art History from the University of Delaware. Dr. Greene examines African American and African diaspora identities, the body, feminism, abstraction, and music in modern and contemporary art. She is the Visual Arts Editor of Transition magazine. Greene serves as an advisor to the ICA Boston for the 2022 United States Pavilion presenting the work of Simone Leigh for the 59th Venice Biennale.

Dr. Greene joined the faculty of Wellesley College as an Assistant Professor in the Art Department in 2013 (granted promotion to Associate Professor for fall 2021). She has traveled throughout the United States and internationally, including to Chile, England, Ethiopia, Italy, and South Africa, to deliver lectures on the Arts of the African diaspora. She is the recipient of the Mellon Postdoctoral Fellowship in Art and Africana Studies at Wellesley College, the Woodrow Wilson Career Advancement Fellowship, and the Richard D. Cohen Fellowship at the Hutchins Center for African and African American Research at Harvard University. She was an artist-in-residence at the Ucross Foundation in Wyoming in 2019.

Her forthcoming book, Grime, Glitter, and Glass: The Body and The Sonic in Contemporary Black Art  (Duke University Press, 2021) presents a new interpretation of the work of Renée Stout, María Magdalena Campos-Pons, and Radcliffe Bailey, and considers the intersection between the body, black identity, and the sonic possibilities of the visual using key examples of painting, sculpture, photography, performance, and installation. Grime, Glitter and Glass was awarded a Wyeth Foundation for American Art Publication Grant in 2020. 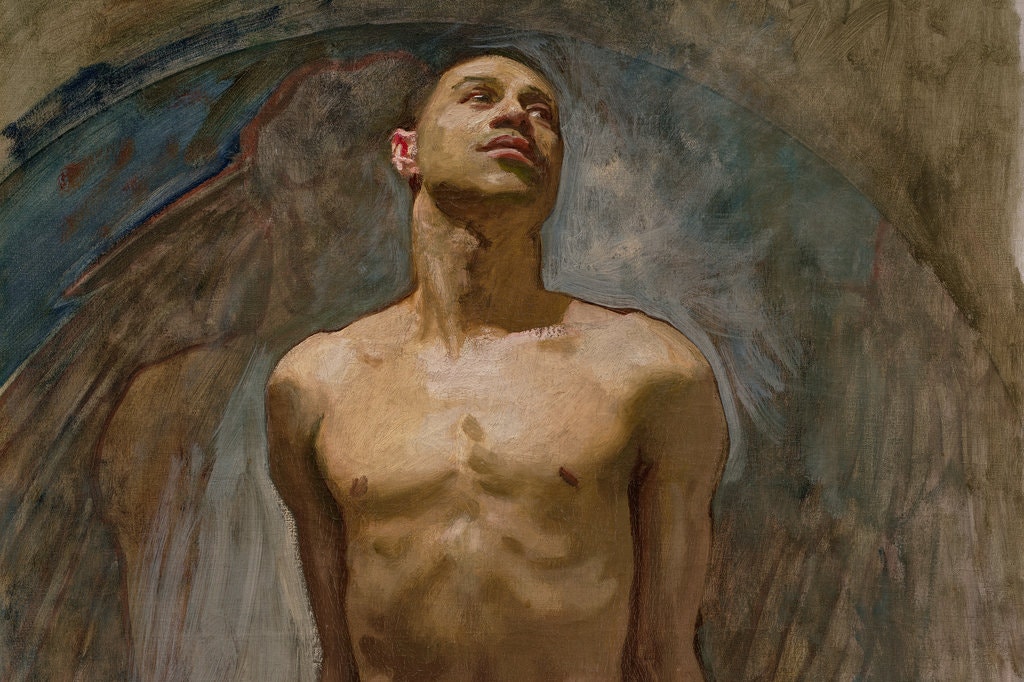 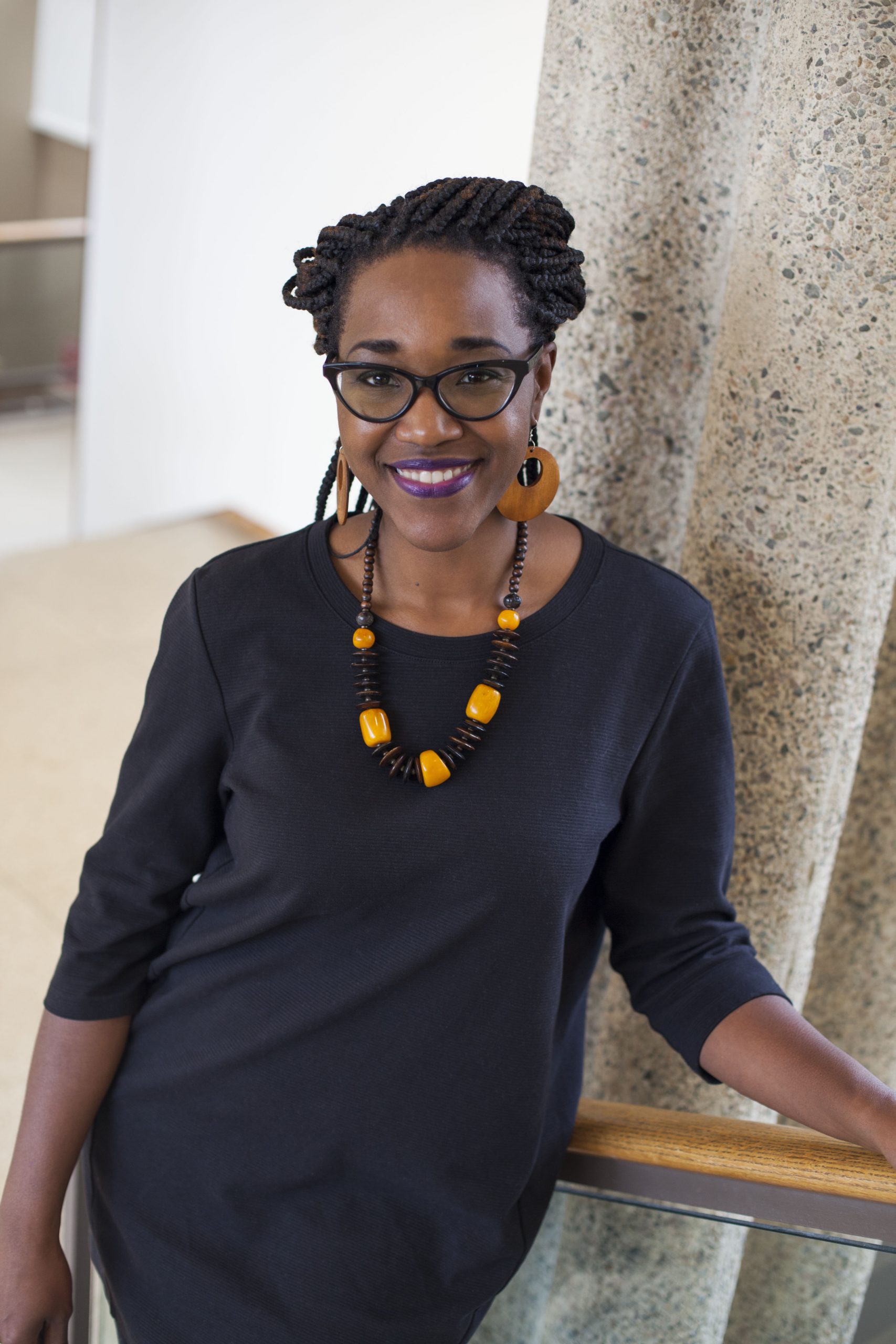 Join us on Tuesday, March 9, 2021 at 6:30 pm for a ZOOM conversation with bestselling nonfiction writer and feminist activist Dr. Naomi Wolf.

Presented in conversation with SNMA Executive Director Hunter O’Hanian, New York Times Naomi Wolf will share her recent book, Outrages: Sex, Censorship and the Criminalization of Love. Outrages explores the history of state-sponsored censorship and violations of personal freedoms through the inspiring, forgotten history of one writer’s refusal to stay silenced.

The event is free, open to the public and conducted via ZOOM.
CLICK HERE TO REGISTER
Upon registering a link and password will be automatically emailed to you.

Outrages: Sex, Censorship and the Criminalization of Love
In 1857, Britain codified a new civil divorce law and passed a severe new obscenity law. An 1861 Act of Parliament streamlined the harsh criminalization of sodomy. These and other laws enshrined modern notions of state censorship and validated state intrusion into people’s private lives.

In 1861, John Addington Symonds, a twenty-one-year-old student at Oxford who already knew he loved and was attracted to men, hastily wrote out a seeming renunciation of the long love poem he’d written to another young man.

Outrages chronicles the struggle and eventual triumph of Symonds—who would became a poet, biographer, and critic—at a time in British history when even private letters that could be interpreted as homoerotic could be used as evidence in trials leading to harsh sentences under British law.

Drawing on the work of a range of scholars of censorship and of LGBTQ+ legal history, Wolf depicts how state censorship, and state prosecution of same-sex sexuality, played out—decades before the infamous trial of Oscar Wilde—shadowing the lives of people who risked in new ways scrutiny by the criminal justice system. She shows how legal persecutions of writers, and of men who loved men affected Symonds and his contemporaries, including Christina and Dante Gabriel Rossetti, Algernon Charles Swinburne, Walter Pater, and the painter Simeon Solomon. All the while, Walt Whitman’s Leaves of Grass was illicitly crossing the Atlantic and finding its way into the hands of readers who reveled in the American poet’s celebration of freedom, democracy, and unfettered love.

Dr. Naomi Wolf’s most recent books include the New York Times best sellers Vagina, Give Me Liberty, and The End of America, as well as the landmark best seller The Beauty Myth. She completed a doctorate in English Language and Literature from the University of Oxford in 2015 and has taught at The George Washington University and Stony Brook University. Wolf lives in New York City. 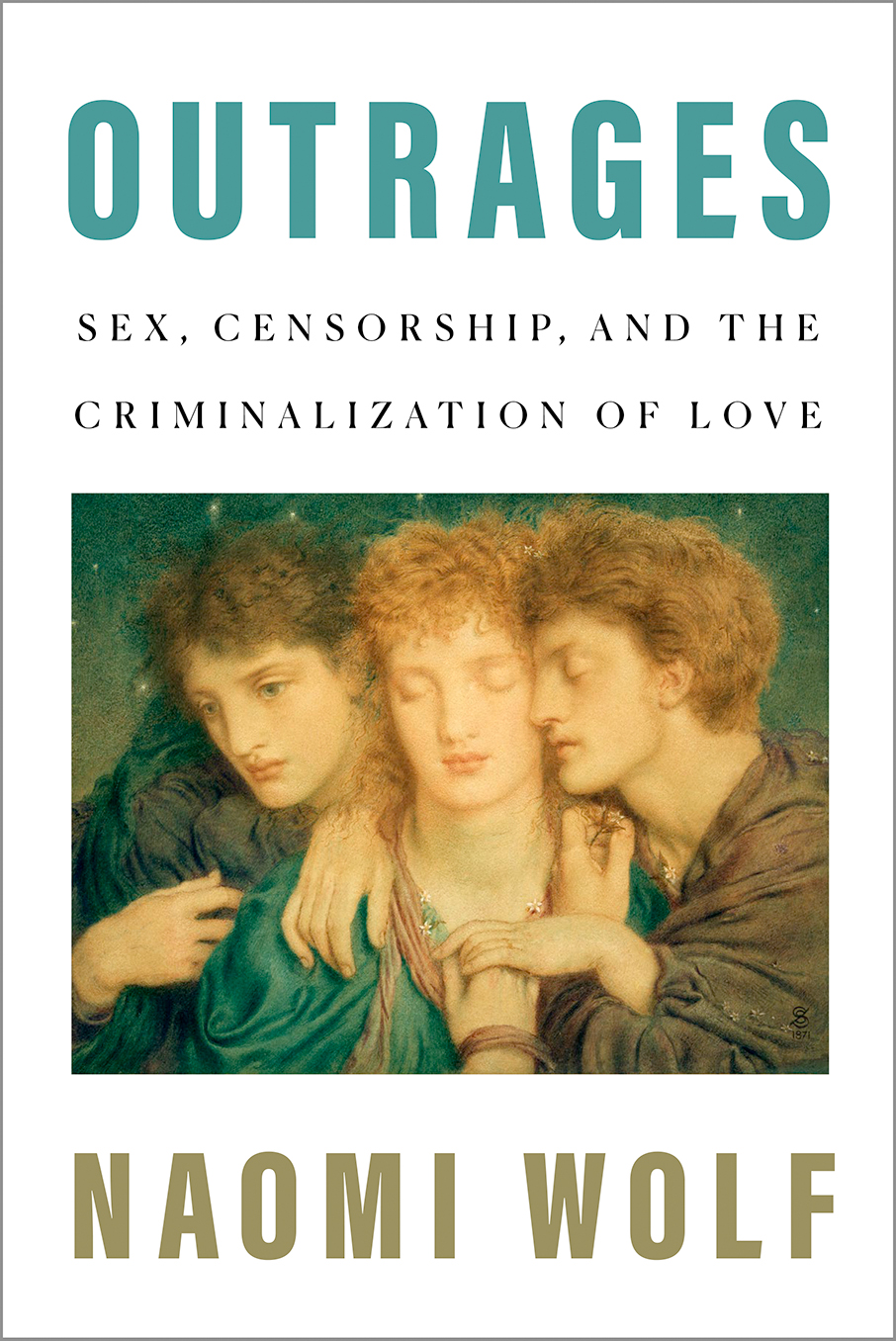 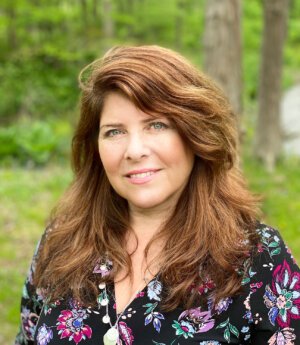 A Virtual Tour of the Tom of Finland exhibition at Galerie Judin in Berlin with Mischa Gawronski – December 7, 2020

A Conversation with Maria Bauman-Morales – December 9, 2020

A Conversation with Michelle Handelman – December 3, 2020

A Conversation with Advancement Project, Campaign for Southern Equality and Nationz Foundation – October 28, 2020

A Conversation with Jordan Rutter – October 7, 2020

A Conversation with Jane Fleishman – September 23, 2020

A Conversation with Jenni Olson – September 8, 2020

A Conversation with Artist and Educator Steve Locke – September 3, 2020

A Conversation with Activist and CenterLink CEO Denise Spivak – August 25, 2020

A Conversation with Hunter Reynolds and Jane Ursula Harris – August 19, 2020

A Conversation with Sasha Wortzel – August 5, 2020

A Conversation with Kris Grey and Maya Ciarrocchi – June 9. 2020

Funding for this organization is provided in part by the Board of County Commissioners of Broward County, Florida,
as recommended by the Broward Cultural Council.