Safe/Haven: Gay Life in 1950s Cherry Grove, is presented in conjunction with the Cherry Grove Archives Collection and curated by Brian Clark and Susan Kravitz for Stonewall National Museum & Archives. The exhibition will opens on Friday, February 21, 2020, from 7 pm – 9 pm, with a curators’ talk at 7 pm. Stonewall National Museum – Wilton Manors is located at 2157 Wilton Drive in Wilton Manors, Florida, 33305.  The exhibit will remain on view until May 24, 2020. Stonewall Museum is free of charge. Suggested donation $5. Support for programs at Stonewall National Museum & Archives is generously provided by the Broward County Cultural Council, The Department of Florida Cultural affairs, Funding Arts Broward, and Titos Homemade Vodka.

A private, Stonewall Society VIP reception of this exhibit will take place on Thursday, February 20 from 6 pm – 8 pm, with remarks by the curators’ at 7 pm. RSVP to Monique Force-Setlock, Director of Development, monique@stonewall-museum.org or phone 954-763-8565 Ext. 1106 to learn more about becoming a member of Stonewall Society. 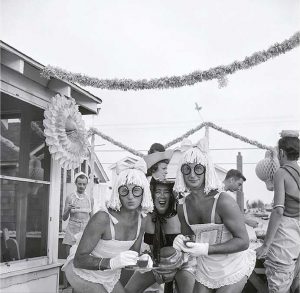 Diaper Party, 1951 Photograph by B. Ronan

Archival photos from the Cherry Grove Archives Collection depict LGBTQ life in Cherry Grove while the Lavender Scare was happening in the rest of the country. For this exhibition, 60 images have been identified and restored from the late 1950s. Most were taken with a medium format camera by artists who summered in the community during that era.

Gay men and women began finding community in the small hamlet of Cherry Grove in the late 1940s and early 1950s. The 1950s have been considered one of the most homophobic times in American history. Sen. Joseph McCarthy’s ‘Lavender Scare’ culture created a world in which gay people were persecuted and ostracized both at work and at home. At the same time The Kinsey Report’s Sexual Behavior in the Human Male (1948) shocked people by identifying an unexpectedly high incidence of homosexual behavior in America. Eisenhower’s Executive Order 10450established sexual perversion as grounds for the investigation and dismissal of federal employees. Taken together they created a climate that made one’s identification as homosexual an extremely dangerous label for gay people.

During the 1950’s gay and lesbian members of this Cherry Grove beach community socialized openly (putting aside the ongoing police raids in the community’s “meat rack”), and often together with straight residents summering there. Costume-themed house parties and theatrical productions were all the rage in the Grove during the 1950’s, where gender fluidity, drag and costume provided an opportunity to openly express one’s homosexuality. While gay men may have initially come to Cherry Grove in the 1950’s primarily in pursuit of sex, men – and women – found a place that provided emotional and social support allowing gay and lesbians to flourish in a community unlike any other in the world.

Historic artifacts such as ferry tickets, theatrical memorabilia, and house signs will be displayed in cases documenting LGBTQ life in Cherry Grove, as well as the participation of Cherry Grove’s gay men and women in local leadership and government, unusual for the time.

With the opening of the Community House in the late 1940s, and theatrical productions starting in 1948, the Arts Project of Cherry Grove was formed and would become one of the first organizations where gay community members could have an openly creative voice. In 2013, the US. National Parks Service formally approved the listing of the Cherry Grove Community House and Theater on the National Register of Historic Places as one of the nation’s oldest continually operating gay theater in the United States.

Dedicated to the preservation of the social, political, and cultural history of Cherry Grove, Fire Island, the Cherry Grove Archive Collection includes many thousands of negatives, photographs, and print media. The Cherry Grove community is thought to be the earliest known safe haven for LGBTQ people and their allies in the United States. The Archives committee collects, preserves and shares this rich and unique history through the archival protection and storage of Cherry Grove’s documents, artifacts, photographs and film.