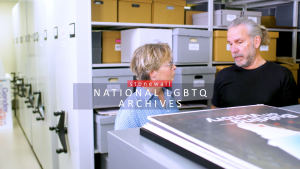 “You mean you aren’t the museum where all the stuff
from the Stonewall Riots in New York in 1969 is located?”

No – we’re not.  But given our name, it’s an understandable question.   It gets asked a lot.

The Stonewall National Museum and Archives (SNMA) is one of the largest gay archives and libraries in the United States, now almost 50 years old.  However, we have no direct link to the Stonewall Riots in New York in 1969.   When we were founded in 1972, the founder Mark Silber used the name “Stonewall” to recognize the fight for LGBTQ liberation that began at the Stonewall Inn in 1969.  It was a name with meaning then and it has become nearly synonymous with gay liberation efforts since that time.

SNMA presents an ongoing 12-month schedule of exhibitions on LGBTQ themes and public programs, including author presentations, films, panel discussions, and collaborative events at its museum and library in South Florida and in cities across the United States.

The Stonewall National Museum and Archives is a Florida non-profit charitable organization exempt from taxation under the Internal Revenue Code.  To see our current 990 tax return, please visit Guidestar.org.